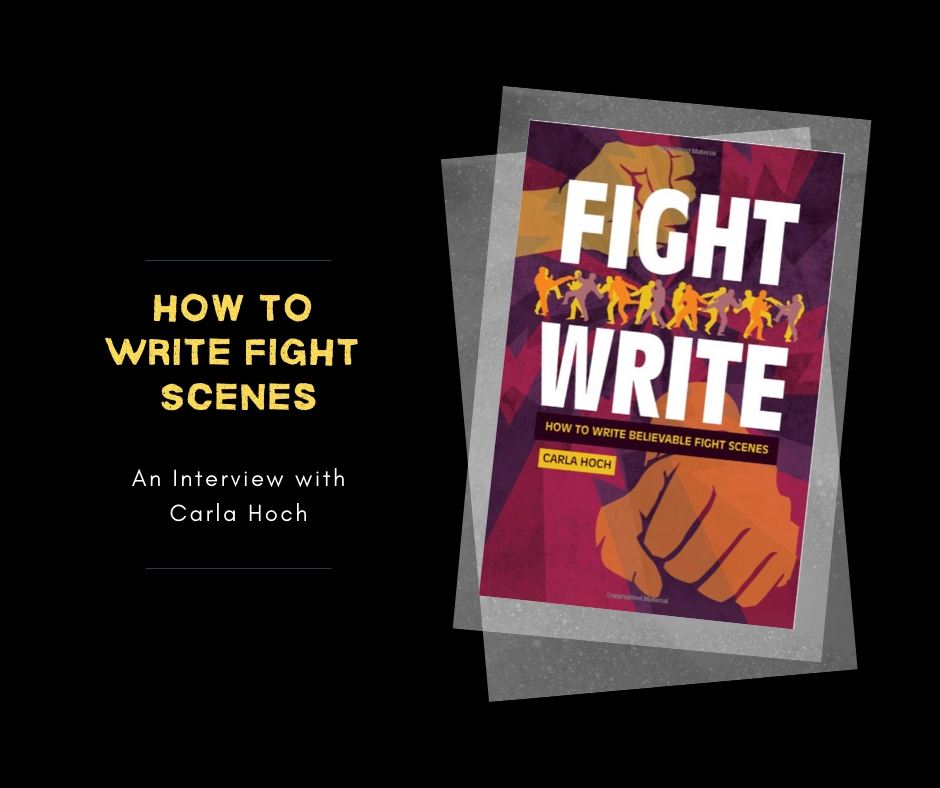 Okay, guys, you’ve heard me talk about books that I consistently recommend writers keep on their desk shelf. Books like Donald Maass’ Writing the Breakout Novel, Stephen King’s On Writing, and others (I’ll follow up this post with another containing my favorites–stay tuned). The latest addition to my list of essential writing books is this one: Carla Hoch’s Fight Write, published by Writer’s Digest books. Why? Because chances are at some point in your story there will be a skirmish, a fight, a battle, a killing, or some other mayhem. Fights or other altercations are NOT EASY to write! I’ve lost track of the battles, fights, skirmishes, and dust-ups I’ve written over the years—but I can tell you it’s a lot, it’s a lot of research, a lot of choreography, and a lot of rewriting and editing to get it just right.

Which is why I am SO excited to share this awesome new book and resource with you by powerhouse fighter and author Carla Hoch—who is also one of the most awesome and hilarious human beings you’ll ever have the joy of meeting.

T: As the author of Fight Write, you are now the go-to guru on writing believable, realistic fight scenes. How did you get to this point—what was your path like?
C:I love this question because the answer really changed not just my writing path but my life. About eight years ago I was working on a book that had a gracious plenty fight scenes in it. But, I didn’t know the first thing about fighting. So, I enrolled in a self defense class.

That hapkido based self defense class led to another martial art, then another. I was still writing all this time and a fellow writer, Ben Wolf, knew about my martial arts exploits. He got me on a panel at a writers conference where writers asked questions about writing fight scenes. Most of the questions were about actual fighting which, by that time, I knew a bit about.

That panel led to me teaching a couple classes. I began editing fight scenes professionally and coaching writers. Then, on a whim, I started FightWrite.net, a blog that teaches about fighting to writers. Now, here I am 8 years, ten martial arts and a Writer’s Digest book later! I’ve also been a featured writer in
Writer’s Digest Magazine and FightWrite.net was number eleven in the magazine’s 100 Best Websites for Writers 2019. The blog also has a companion podcast named, you guessed it, FightWrite.

T: Tell us about Fight Write!
C: The book, Fight Write: How to Write Believable Fight Scenes, is a writer’s resource for writing fight scenes, action and violence. It’s divided into five rounds like a championship MMA fight. Round One covers what a writer should consider from the standpoint of craft. Round Two is about the roll human biology plays in fighting: adrenaline, PTSD, fight/flight response, even how women fight versus men. Round Three teaches a bit about actual fisticuffs. There’s even example fights a writer can use as well as an appendix of fight vocabulary and the difference in fighting styles. Round Four helps a writer pick the best weapon for their character based on the needs of the character as well as the location of the battle and setting in time, culture etc. The final round is all about injuries, stages of death and decomposition. You’ll even find out how much wood you need to actually burn a body.

T: You just took out the world champion in your division to win gold at the International Brazilian Jiu-Jitsu Federation Houston Open. I am proud to say I know you… and suddenly rethinking every fight/battle/skirmish I’ve ever written. Does one have to practice Brazilian Jiu-Jitsu to write believable fight scenes?
C: Absolutely not. Your fight scenes are spot on and, last I checked, your weapon of choice is pointe shoes. Buy my book, frequent my blog, and hit one of my classes when you can. You’ll be fine.

T: What is your best advice for writers when approaching fight scenes/battles/other physical mayhem? 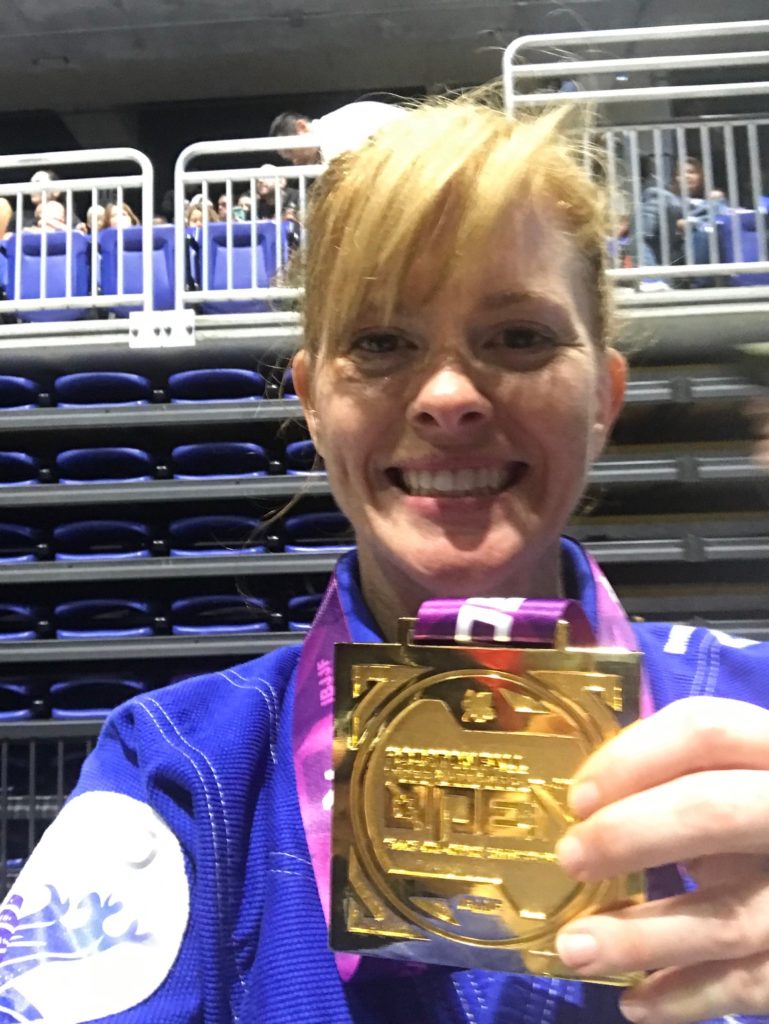 C: Get your reader off the couch and into the arena. Here’s what I mean. When you watch a sport or any type of performance on TV, you see everything. You have a better view than the actual participants. So, why does anyone go see any of those live? Why sit in the nose bleed section of an arena when you can have such a great view from your couch? Because, in the arena, you feel the energy of the performers pitch and roll through the room. The base instruments grip your gut. The smell of the fighters leaves a briny taste on your tongue. The pirouetting of the dancers is so fast, you can’t watch too closely without getting light headed. On the couch, you see it all. In the arena, you feel it. You are part of the experience. That’s what you want for your reader. When a character is punched, don’t just let your reader see it. That’s couch stuff. Put your reader ringside. When that punch lands, make your reader cringe at the sound of a jaw popping out of joint.

T: What is the biggest error writers make when approaching action or fight scenes?
C: We humans like to overcomplicate things. Fight scenes are no exception. Keep them simple. The book Fight Club has three fight scenes. That’s it. One of those scenes is actually three separate fights. Those three fights are composed of only eight sentences. In every single fight, the writer, Chuck Palaniuk, shows what is happening by the physical responses of the characters. He doesn’t bother with the names of things, although, he names one or two moves. But, what the reader remembers is how those move affected the one who had to endure them.

T: If you could sum up the top three things to remember or your best advice when writing believable action, what would they be?
C: Remember this: POW – Prepare, Ouch, Way

Prepare for the scene by considering why it’s happening, where it’s happening and who is involved. Remember that your reader is one of the “whos” involved. Write the fight as if the reader has no knowledge of fighting.

Ouch – Decide on the intended injury. Even if the injury won’t happen, a writer must know what a character intends. If the injury does happen, be sure that it is a logical outcome of the action and consider if action can continue with that amount of trauma.

Way – Make a way to that injury by simple blocking. Only write what you might see in a cartoon panel. Focus on what a reader can relate to such as sights and sounds. By the way, if the scene is from the viewpoint of one of the fighters, there will be no fear present and there’s a biological reason for that. You’ll need to read my book to understand why.

T: What are your other go-to writing books that you recommend authors keep near to hand?
C: First and foremost, I think writers should have books near at hand. All books. Of every kind. And they should read with abandon and without guilt. It’s a part of our job. When you come across a word, phrase, scene, whatever in a book that you like, highlight it, underline it, dog-ear it. Use these things as inspiration and reference. And, not just for word choice, but for story flow and arrangement. For example, Tosca, you reference food quite a bit it seems in The Line Between and A Single Light. I love that because people connect to food. As soon as you write, “I miss ice cream” a reader thinks about the ice cream they love and they are suddenly a part of the story! I will remember that as I write.

I love The Emotion Thesaurus. It describes what the body does in response to emotion. It lets you show what a character is feeling rather than saying it. That’s really more the human experience.

And, I’m about to embark on another writing venture and will be thumbing through Write Your Novel in a Month, quite a bit. That book makes you get your tools together and the words on the page. It’s a great one for NaNoWriMo!

Check out this blog post of Carla breaking down a pin from my most recent novel, A Single Light and you could win a copy of her book as well as a Single Light swag bag! 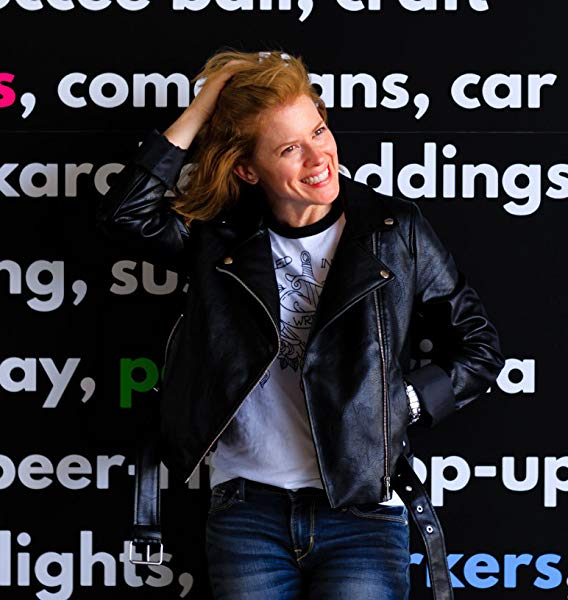 Carla Hoch is a writer and trained fighter with experience in nearly one dozen martial arts and fighting styles. She is the blogger behind FightWrite.net, a blog dedicated to teaching fighting to writers, and regularly teaches classes and workshops on fight writing as well as fight techniques for writers. She lives in Spring, Texas, with her husband, two children, gossipy guinea pigs, and a cat who finds Carla’s computer to be a fine place to sleep.